Yes, I still have no scanner I could use and I also learned that my sister's scanner doesn't work either.... -_-

So simply put my hiatus will still take a while. However, I wanted to give a small heads-up. 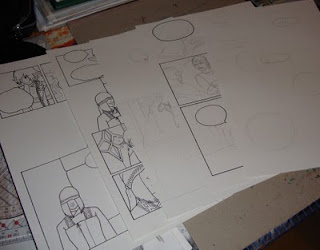 Here you get to see a glimpse of the five next pages of TOE which I have been working on when ever I feel like it.
Since I'm working on five pages at the same time I can choose which panel to draw first and etc. Only because I don't know when I can update next I haven't yet started to paint them (even though the two first pages have their lineart ready).

Thank you for your patience and lets hope for the best.
Posted by winzrella at 18:49 No comments:

Do not read this before you have read the first part of the story!

The first part of Tari Uyest' (TWOD from now on) builds the ground to the story. We begin it from our world which is much easier for you to understand. We also get to see glimpses of Amy's life and her personality which may or may not be simple. 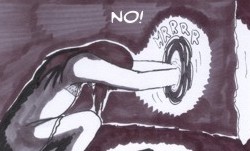 She's a quite strong character and not easily scared. If I had been her and had seen my brother walk trough a portal I would simply panic and call 112 (which is the emergency number here) or something else! I would not go and struggle against a freaking magical portal!!

This early in the story and for a while Amy's strenght will seem like she's almost too strong. Later, however, we get to see other sides of her.

From the very beginning I always imagined Amy to be a teenager from the early 90's. That makes her a good 10 years older than myself XD

The fact that the story takes place in the early 90's might not be too apparent in the beginning, but much later in the story when we return to our own world I will make it clearer. I was only a child in the early 90's myself, however, so I don't know what it was to be a teenager at that time. But when we get to the later stages of the story, as I already said, I will make it more apparent (which means it will be some studying for me at that time!).

One thing I will still point out: Amy does not have a cellphone. This also includes that computers are rare and internet is not how you spend your time.

In Part 1 we also got to see other glimpses of her life.

She uses two languages, being fluent with both. She's not exactly a hard working student and just tries to get the courses needed. And she's not happy about the extra course she has. She has a boyfriend who's not overly trusting and believes she's cheating on him. She has a sister who has not yet appeared. She sleeps in the same room with her brother. Etc.

There is also a lot more I hint on about in her life, but for now I won't mention them.

To avoid spoilers I can't really tell much more so instead of talking more about what this first part had in it I will tell you about the changes the story has faces ever since it's creation in 2002 and compare them to this final version.

In the very first version Albert, Amy's brother, had no name and only a short storyteller part. The only thing I knew about him was that he was her older brother. After the first version Albert came to exist as he's today. And from that moment on he was the one to walk through the portal first and Amy's duty was to follow him. It still took untill the fourth version, however, before Albert started to walk in a trance. First he was fully awake, which was strange because who in his right mind would just walk trough a strange portal?!?

So, he became spellpound instead.

In the first version Amy was the only one to travel through the portal. But she wasn't very willing to do it since she actually fell from a bridge (how did I come up with a place like that?!). This also happened during the day not during the night so she wasn't dressed in a night dress. She was actually on her way home from school. During this time, however, Amy had no real personality (-.-). 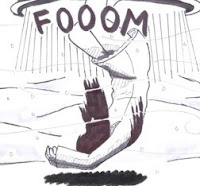 The only thing I'm sad about in giving up my first plan of how Amy went trough the portal is the fact that it's actually much more intresting than the one I'm using now. However, Amy grew a personality and Albert came to have a big part in the story. This is why I had to give it up in the end. There is also another reason which I'll explain next.

The biggest change between the first version and the following versions was the point of view in the story. The first version was observed from the parallel world. Our own world stayed really as a mystery. I still even today like this old approach better than the one I have now, but the truth is that the current way is easier for a reader to understand.

And this change in point of view was also a reason to why I changed the method of Amy ending up in the other world.

I had to give up some very good material to make the story better as a whole.

Toni also came into the picture after the first try as Amy's boyfriend when Amy's character was forming in my mind. The relationship between them has always been the same - one of not much love. Designwise Tony has stayed pretty much the same. I only simplified him since the first design. I never thought that he would need any changing. His appearence already makes the character he is.

Amy's family and life has been in it's current shape since 2003 when I gave up on the first version. Her parents are divorced and she's living with her brother and mother in Finland which is her mother's birth country. Her father still continues to live in United States where he's from. Amy moved to Finland some years after the divorce. She was born in US and grew up there. She has an older half sister with whom she shares a mother.

The reason why I gave up the first version in the first place was that I wanted to create a story that really worked instead of just drawing something for myself as I originally did. This is why the change was most dramatic between the first and second versions. The following versions have been quite similar to each other with some improvements.

In case you were confused by my talk about versions I would like to clarify it.
The first version of TWOD was created in 2002 just for my own enjoyment as I mention above. After that first version TWOD has had three slightly different versions. The version I'm now working on is the final and fifth version.

That's all I can say for now. 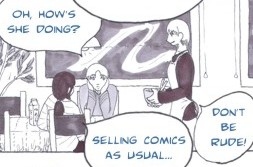 Posted by winzrella at 11:22 No comments:

Taint of Exile (or TOE) is a story with some historical facts mixed with a fantasy world and setting. It follows the life of an exiled sorcerer and a small empire struggling against viking invasion.

Tari Uyest' or the Way of Dreams (or TWOD) is a story of a girl from our world traveling trough a portal to an alternative Siberia. It follows the adventures of this girl and her two curious comrades.

Navigation to other sites